THE DARLINGTON ORDINARIATE GROUP
2012 - 2021
(the website of the new group can be found here https://www.ordinariate-darlington.co.uk) 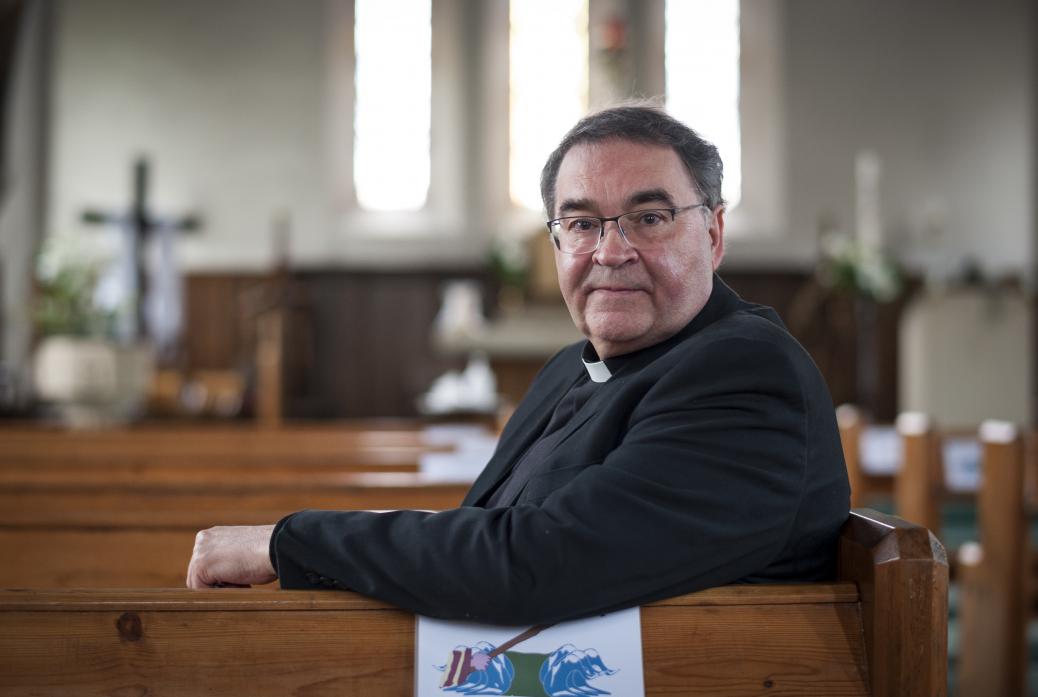 ​'And the light shineth in darkness; and the darkness comprehended it not'.

​Father Ian Grieves is retiring as parish priest for Gainford and Barnard Castle. He will be remembered for switching from Anglicanism to Catholicism and taking nearly all of his congregation with him. Editor Trevor Brookes spoke to a man who was once described by the Archbishop of Canterbury Justin Welby as a “quite exceptional priest”. 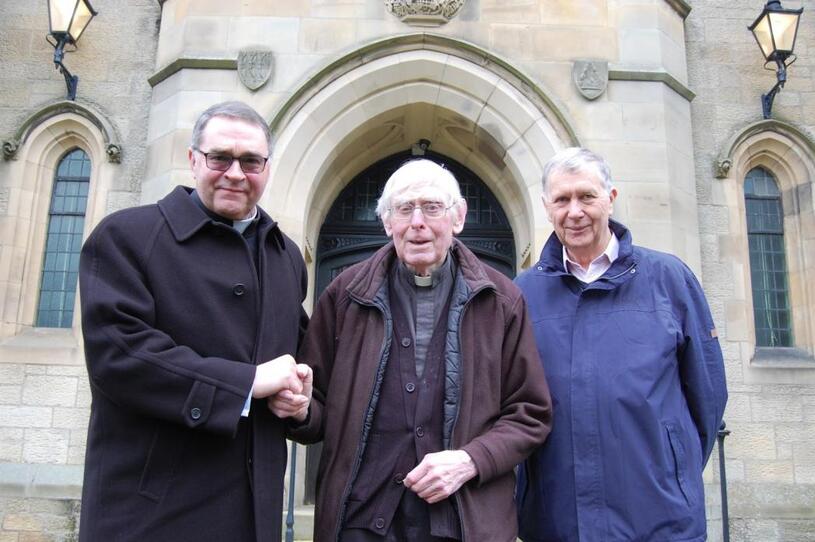 CATHOLICS in Teesdale are mourning the death of a priest who served them for almost two decades.
Father Wilfred Elkin died peacefully at The Manor House care home, in Barnard Castle, on March 13, aged 85.
He had been parish priest at St Mary’s Catholic Church in the town from November 21, 2001, until his retirement in spring 2017. The priest was born to a large family in Gateshead on May, 2, 1935, and entered Ushaw College as a junior seminary aged 11.
Father Ian Grieves, who served with him for about nine years, said: “He was a conscientious and willing student who took part in all aspects of college life.”
Fr Elkin was ordained in July 1959 and went on to serve at churches in Sunderland, Newcastle and Consett before joining St Patrick’s Church, in Ryhope, in 1978.
He was so admired by parishioners in Ryhope that they successfully petitioned the Bishop of Newcastle and Hexham to extend his stay there, Fr Grieves said. He added: “In all of these places he worked hard to promote the Catholic faith, and for all of his parishioners. He loved the Latin mass, which we call the Extraordinary Mass. He was thorough in his preparation of first holy communion and confirmation.”
Fr Elkin had diverse interests ranging from walking and gardening to keeping up to date with modern technology and even wrote a regular blog.
One of his blogs described how cranes were stealing goldfish from his ponds.
Fr Grieves said: “He loved his greenhouse and ponds. He was also very fond of The Castle Players and he attended their summer performances at The Bowes Museum.
“He was very quick and witty.” One the priest’s quips were: “I have to love my parishioners but I don’t have to like them.”
Despite being active in his community and being supportive of charities and missions, Fr Grieves described the priest as also being “a modest, private and reserved person”.
Another of his favourite pastimes was sailing and he and his father would often take their boat out at Seahouses and Seaham.
Aptly the boat was named Welkin, a derivative of his name Wilfred Elkin and a nickname he had picked up in seminary college.
A requiem mass was held in Latin for Fr Elkin at noon on Wednesday, March 31, at St Mary Church.
The mass was conducted by the Bishop of Newcastle and Hexham, Rt Revd Robert Byrne.
The service will be lived-streamed and people can join by following a link from the church’s Facebook page.

​﻿
FATHER GRIEVES
Would like to express his gratitude to everyone for the gifts received at his retirement on Sunday 4th April, especially the financial gift which has now exceeded £5,000. Father was also presented with a cheque for £1,020 from the congregation of St Mary's RC Church, Barnard Castle, in thanksgiving for his Ministry. The congregation of St Osmund's have recently presented Fr Grieves with a cheque for £1,000. 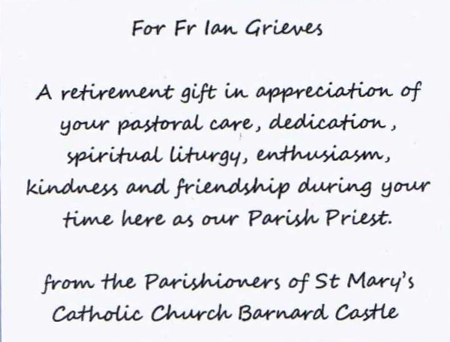 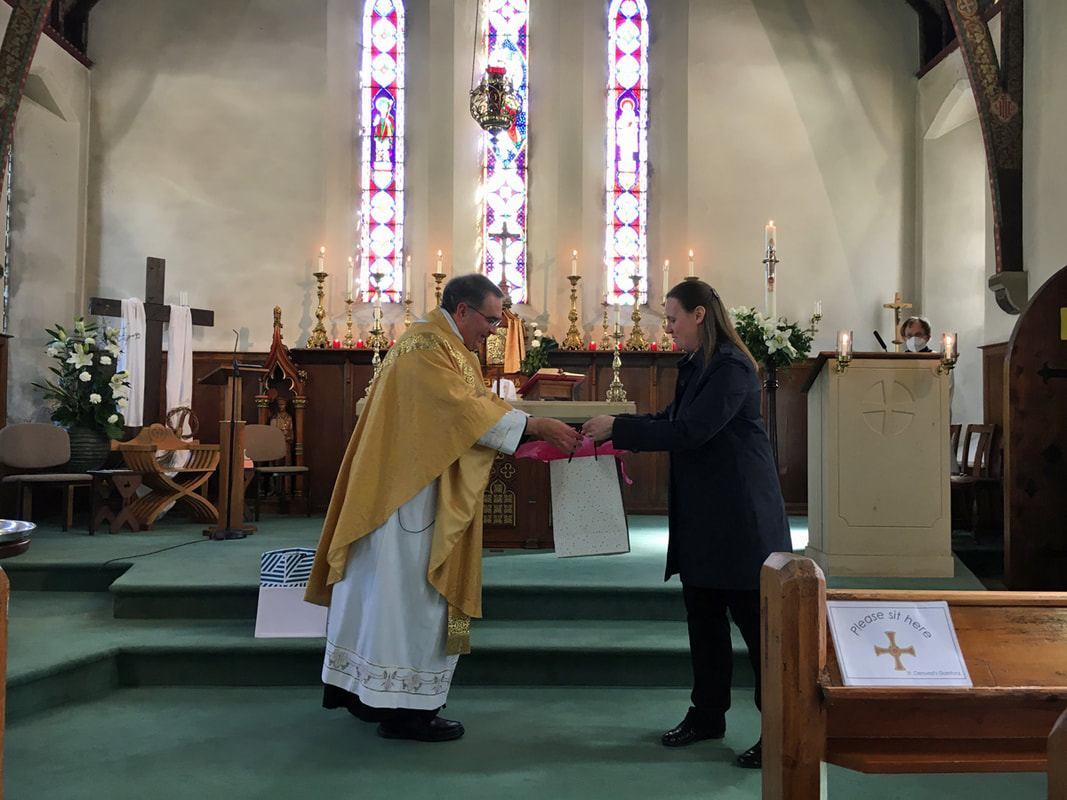 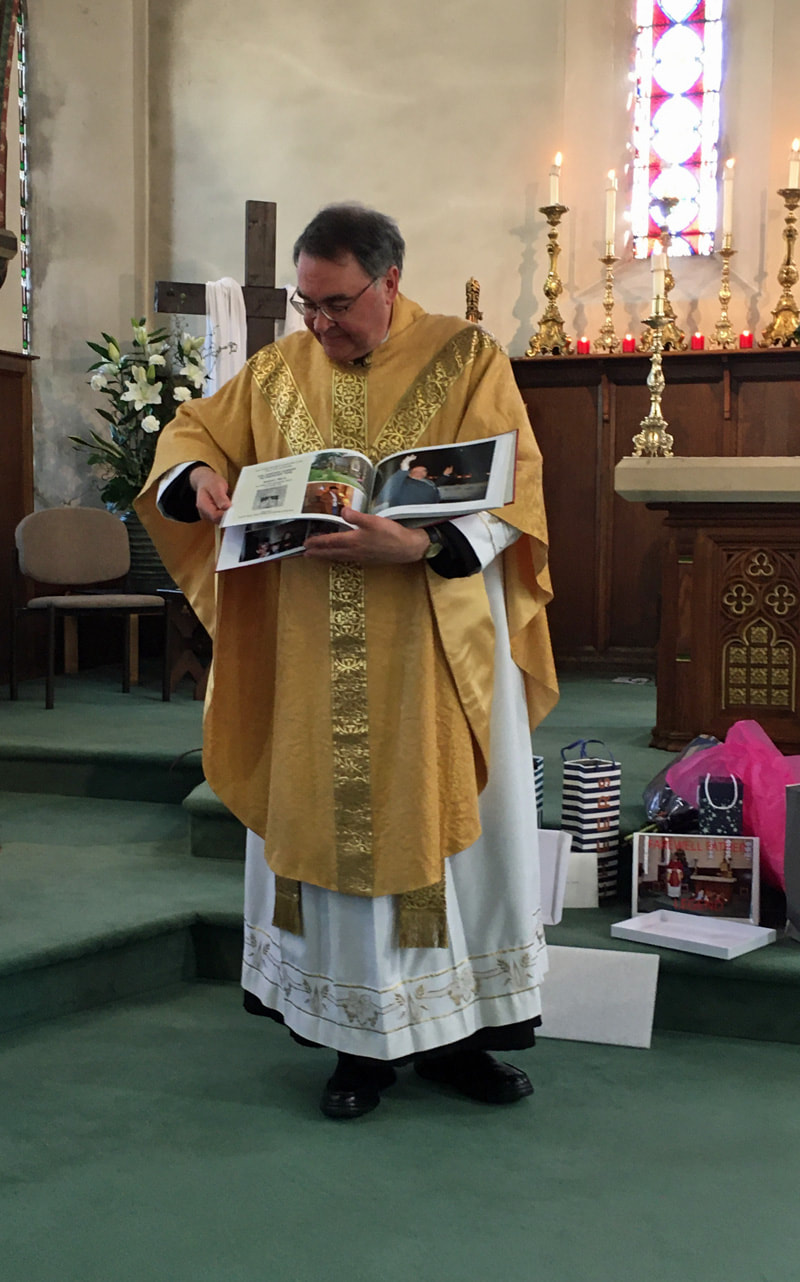 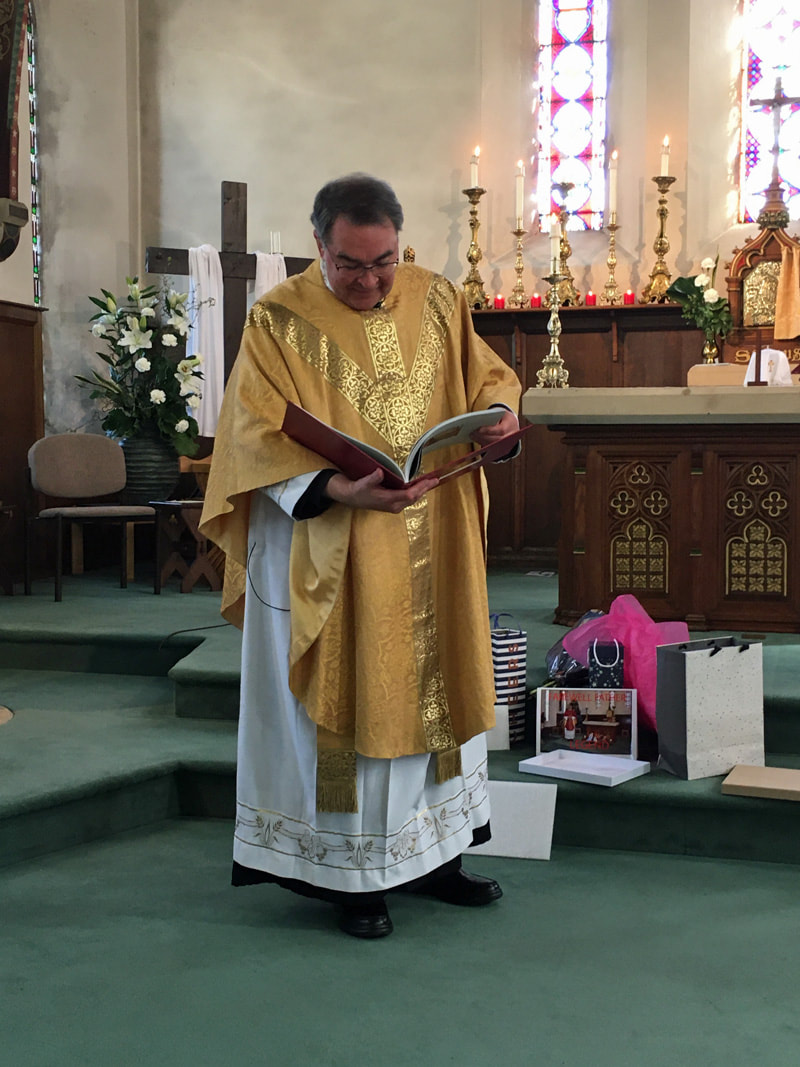 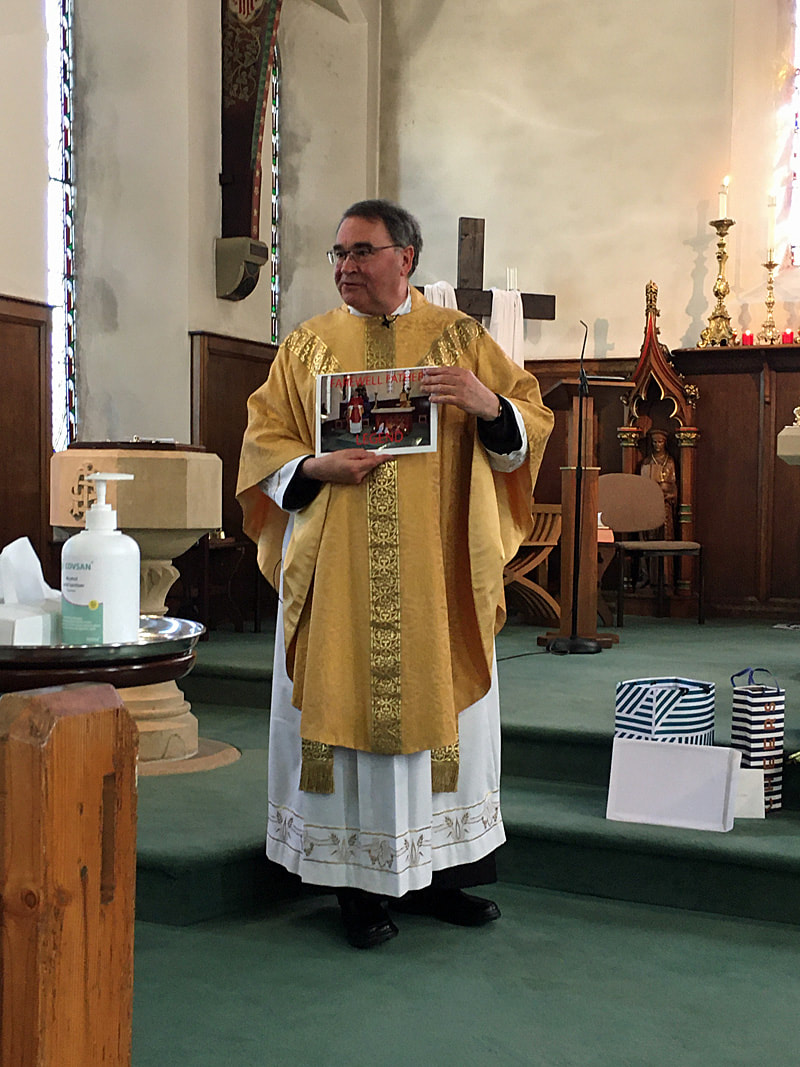 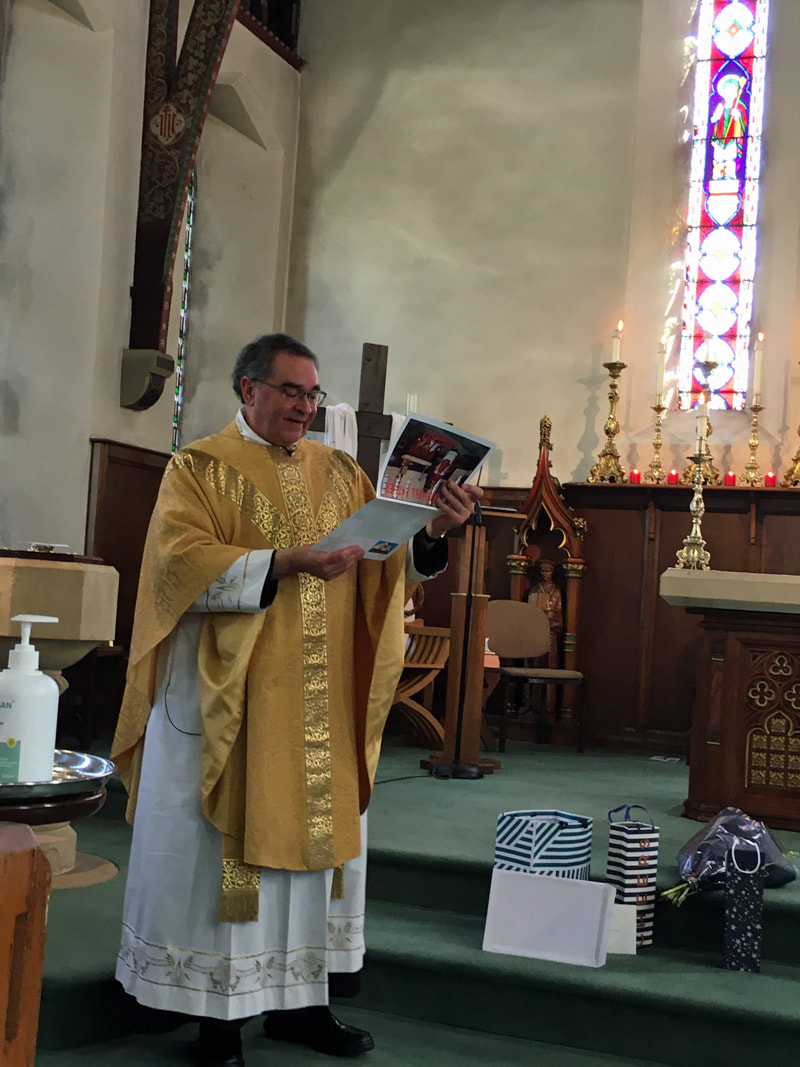 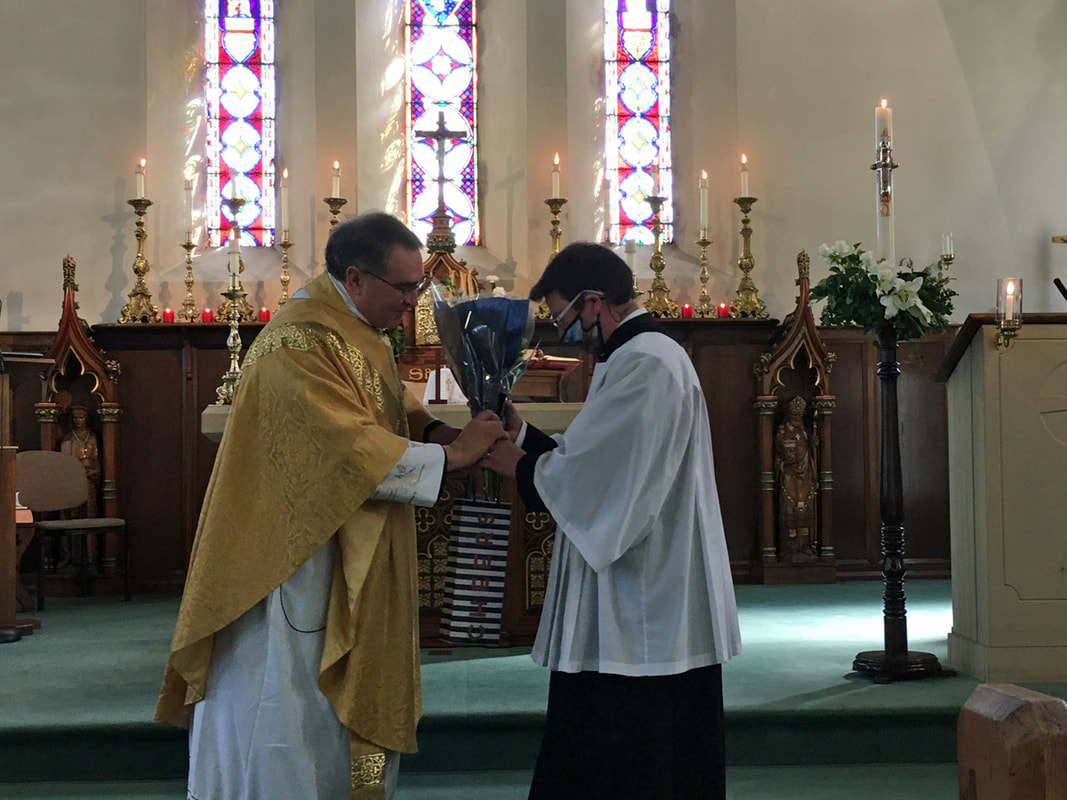 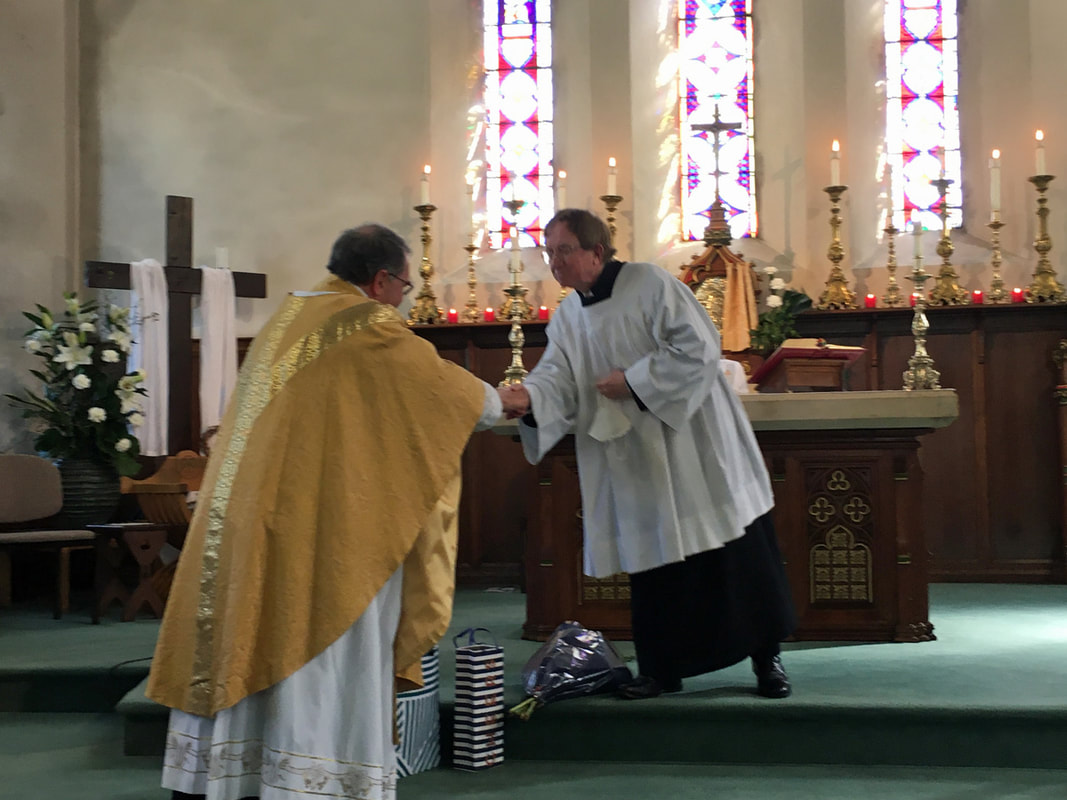 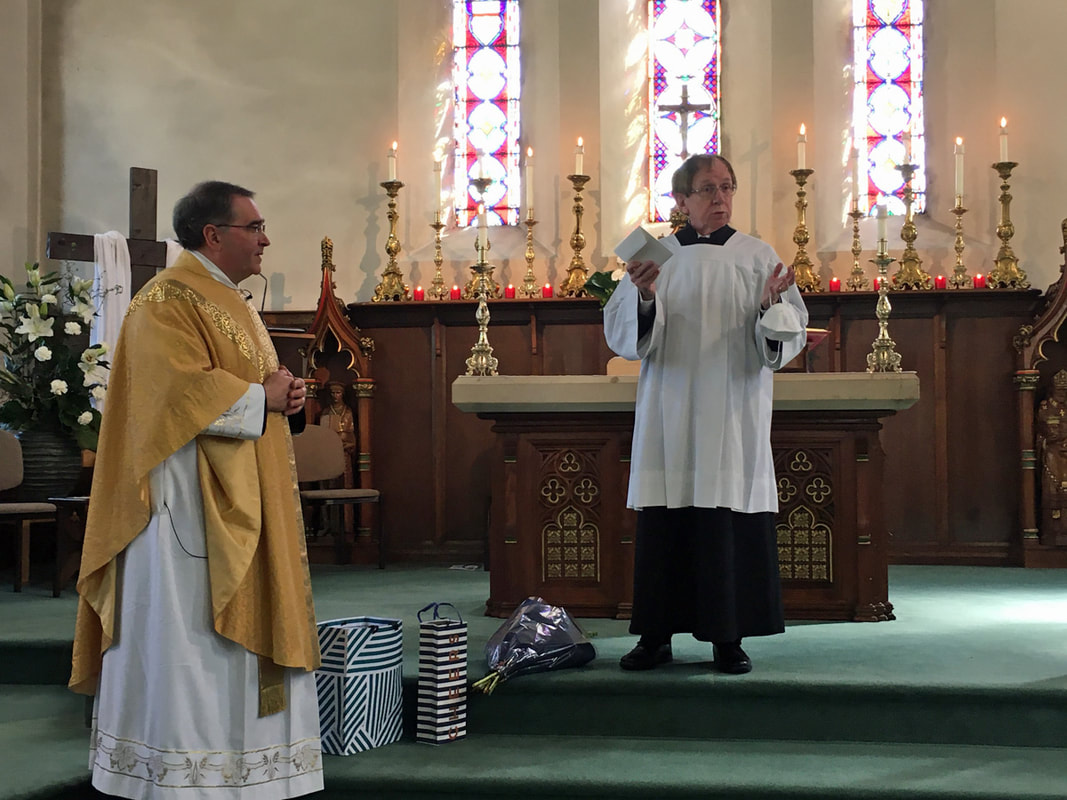 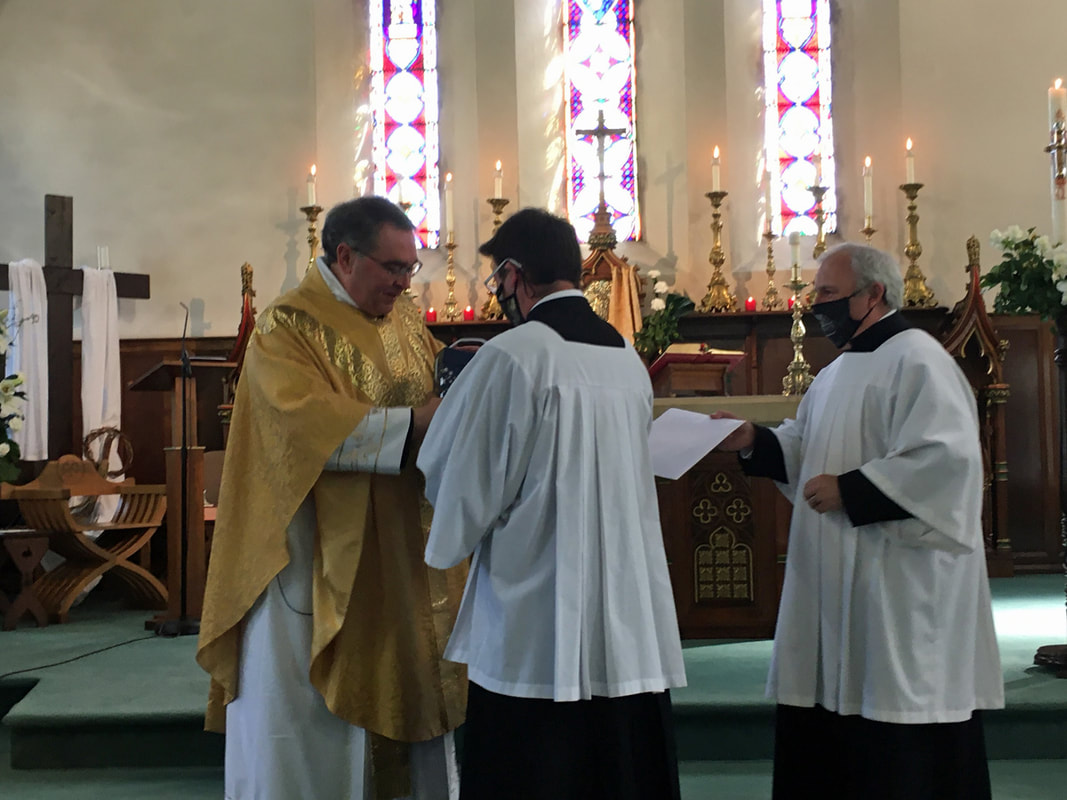 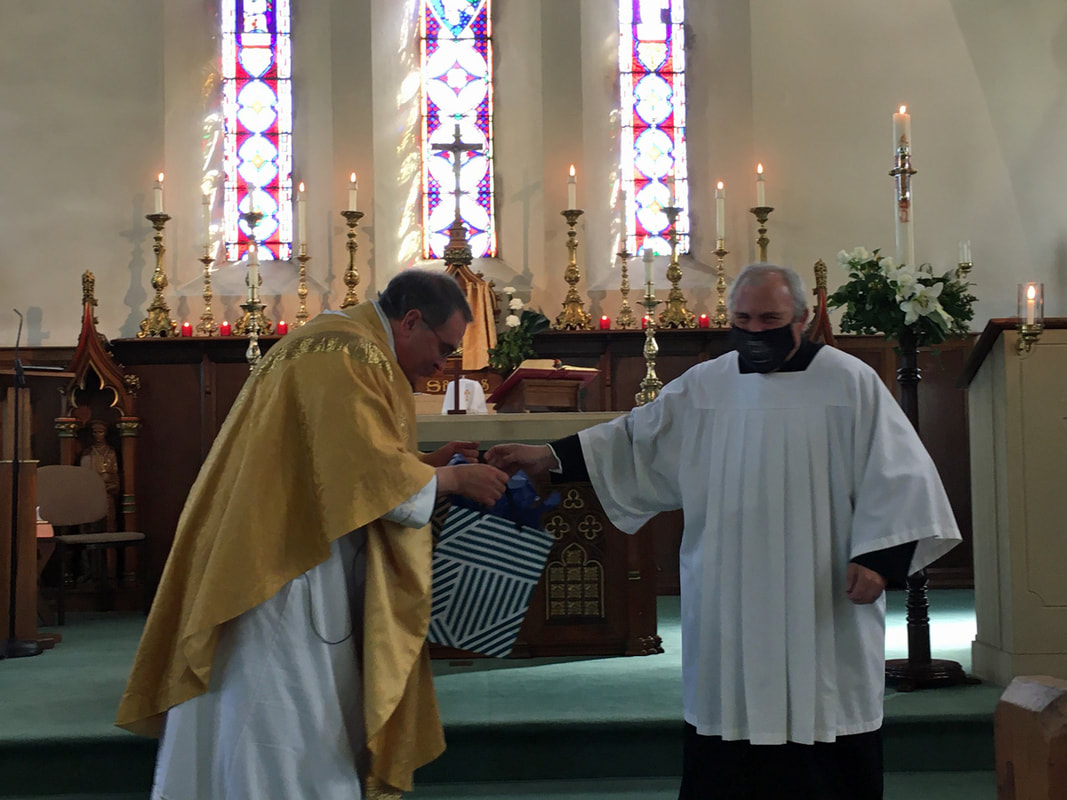 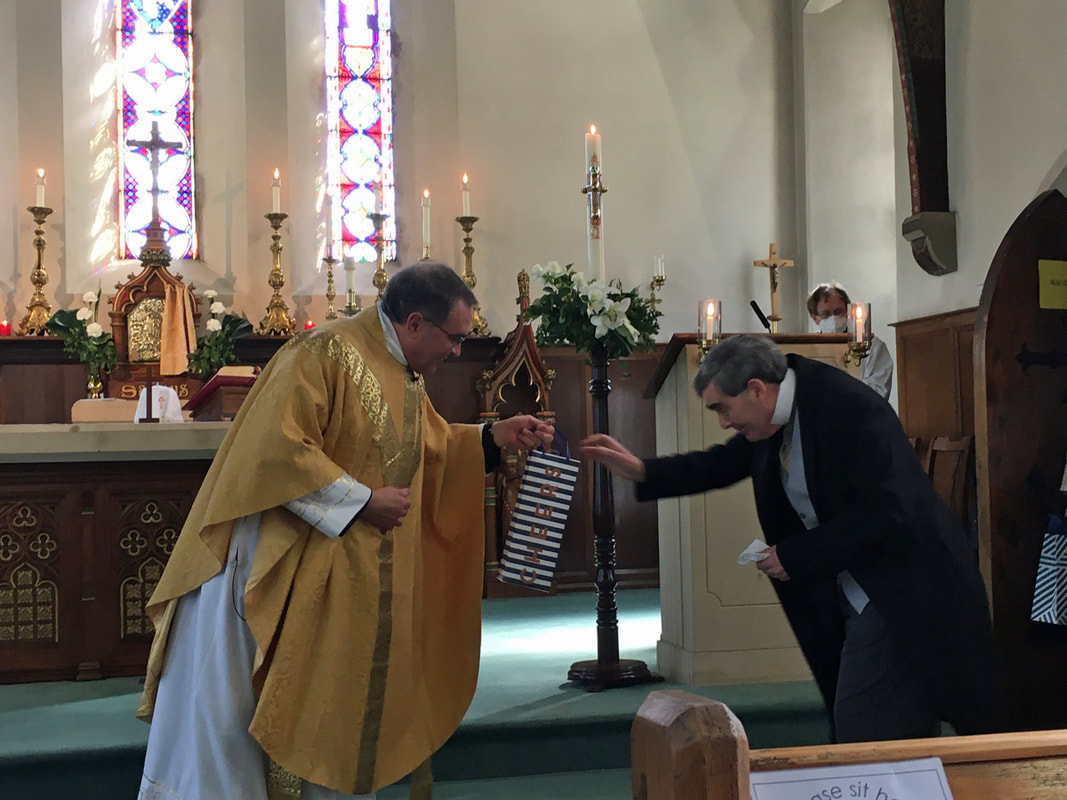 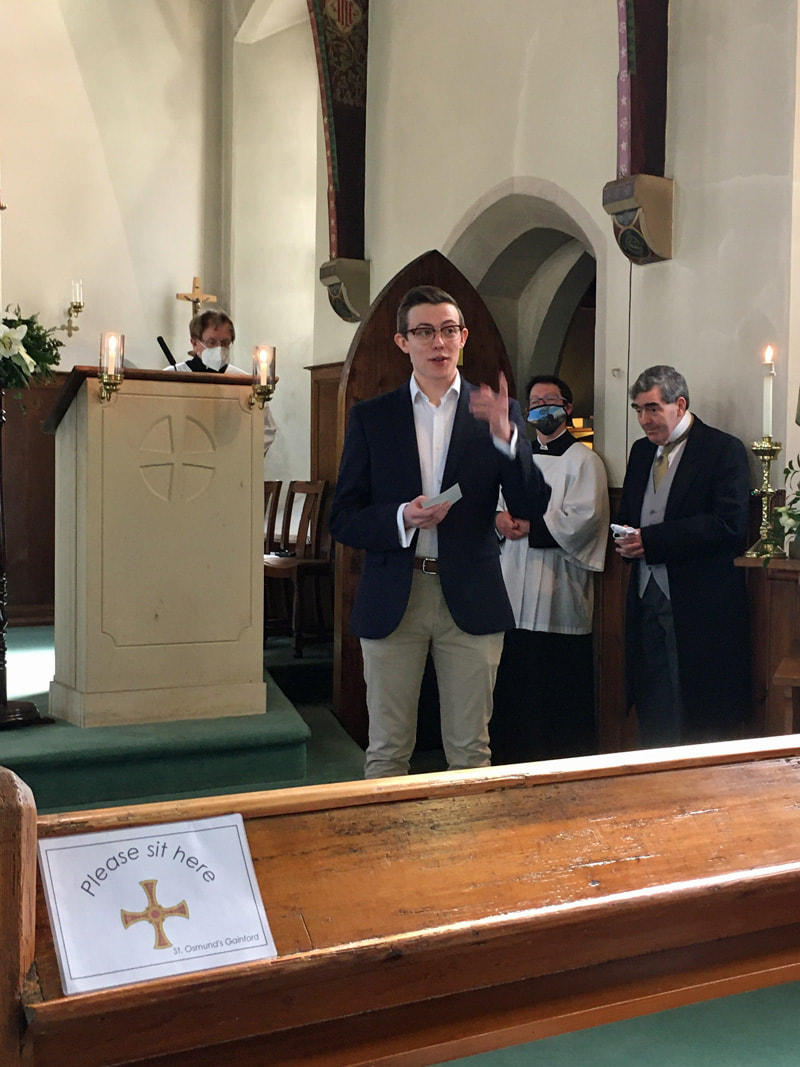 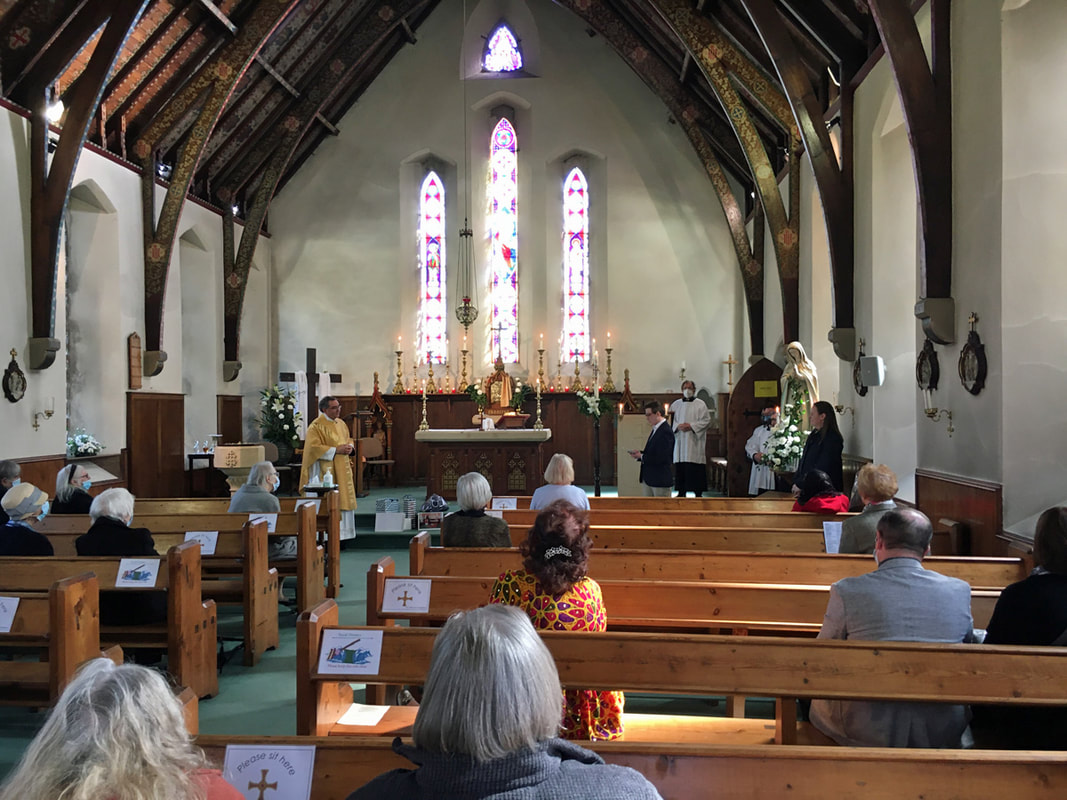 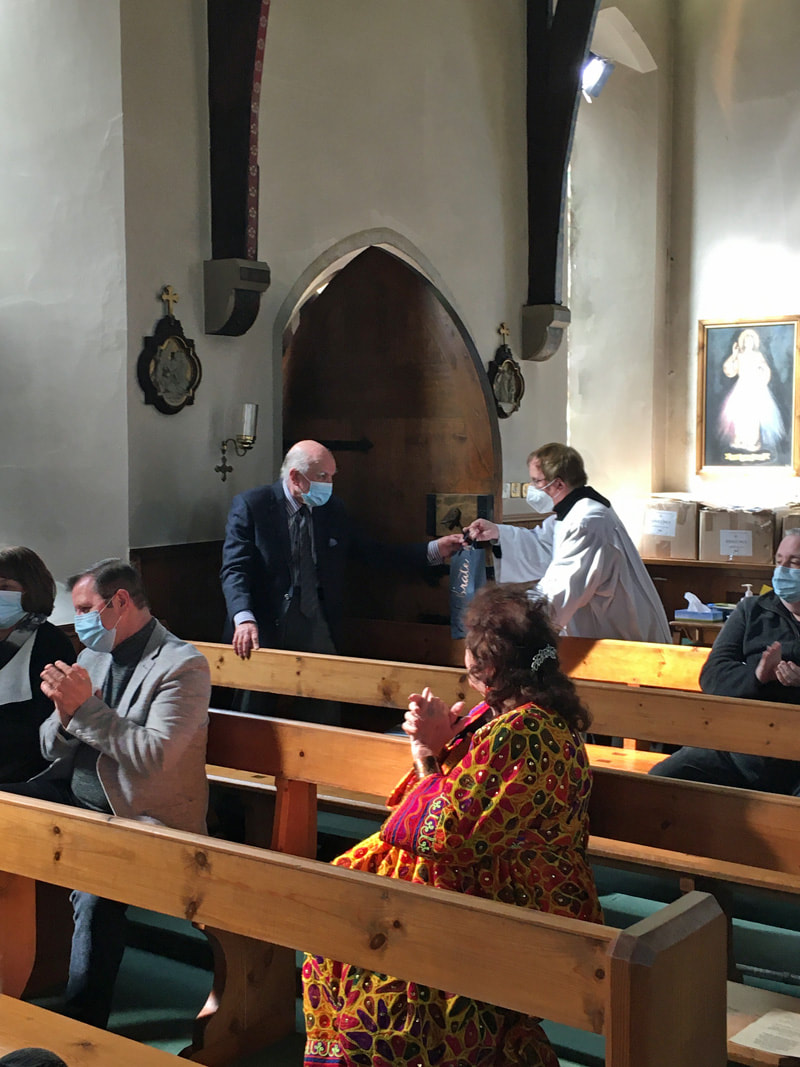 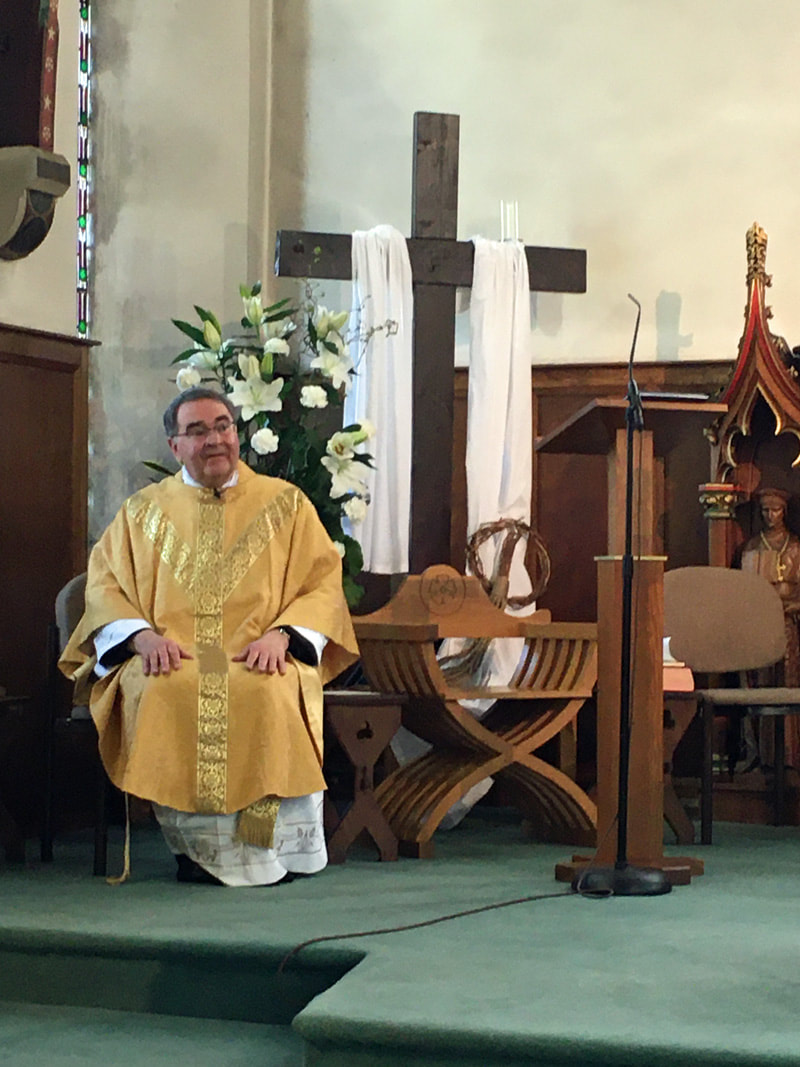 SOME FACTS & FIGURES FROM
THE DARLINGTON ORDINARIATE GROUP

The OLOW Darlington Group has contributed, by way of Levy, £53,072.00 to the OLOW central funds & given £20,246.00 to 66
good causes and Catholic Charities while the group has served
at Gainford and Barnard Castle.
It is important to remember that the group has received
no external monies or funding & paid for its priest
& his expenses in full & running costs.

The members of OLOW DARLINGTON GROUP express sincere & grateful thanks to the TRUSTEES of the DARLINGTON ORDINARIATE TRUST for their financial support of over £43,000.00 while at Gainford.

The OLOW DARLINGTON GROUP has brought over
100 converts into the Catholic Church.
The Darlington Ordinariate Trust has organised 80
social events and 30 parish lunches
(catering for 80-100 people) while at Gainford.

The choir have also sung Masses in St Peter’s and the other basilica churches in Rome and in five cathedrals in Spain, always to great acclaim. While in Gainford and Barnard Castle the choir have performed 461 choral Masses.

FATHER GRIEVES’ RESIGNATION & RETIREMENT
The Darlington Group & Pastoral Council would like to record
their sincere and grateful thanks to Father Grieves for his ministry
of almost 9 years as a Catholic priest, and acknowledge his ministry as a priest within the Church of England at St Mark’s Darlington,
St Mary’s Whickham, and for his 23 years as Vicar of
St James the Great, Darlington.
He has offered MASS EVERY SUNDAY and provided a daily
celebration of HOLY MASS while at Gainford. We also acknowledge the ministry of our 10 adult servers and 4 altar boys who have assisted him (many daily) in this great work.

We record our sincere and gratfeul thanks to ALL MEMBERS of the Ordinariate Group FINANCE COUNCIL & PASTORAL COUNCIL,
all of whom resigned on 31st March 2021.

Please pray for our NEW PRIEST, FATHER THOMAS MASON, as
he prepares to serve us in the parishes of St Mary’s Barnard Castle,
St Osmund’s, Gainford, St Aidan Middleton in Teesdale &
the Ordinariate Group.